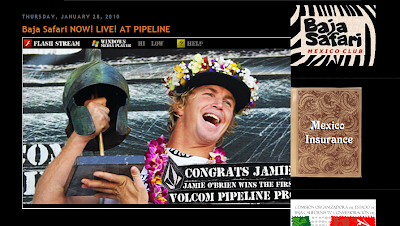 Baja Blackout! Storm News from The Road in Mexico

CLICK HERE FOR PICTURES & VIDEOS FROM THE DISASTER ZONE!

Surfline.com sends thousands of surfer websurfers over our way. COOL.

The recent storm was the most intense, largest low pressure system/front ever recorded by the National Weather Service!

Update from San Vincente area:
Report from the Rancho Santa Marta in San Vincente. About an hour ago Hwy 1 opened at the San Vincente bridge. Officials made a make shift dirt road through the wash, diverting water. There is no word on roads conditions to the south.
The Rancho has been in San Vincente over 35 years and has never seen so much water. Several people lost everything they owned and are now being housed at local schools.
Weather is supposed to come in again Tuesday and maybe Saturday.
People at the observatory and rancho conception still stranded.
...


"Authorities worked Monday to restore areas south of Ensenada flooded by last week’s heavy rains, including a damaged bridge on the Transpeninsular Highway about 120 miles south of Ensenada that has stranded thousands of residents.

The Santo Domingo bridge was expected to be at least partially restored by Tuesday, said Jaime Nieto, civil protection director for Ensenada. That will re-establish a key link on the Transpeninsular Highway, the major artery connecting communities along the Baja California peninsula.

Because of the extensive damage, Baja California Gov. José Guadalupe Osuna Millán declared an emergency in the region, giving state authorities access to federal funds to repair damaged roadways and bridges. Funds will be used to repair the Santo Domingo bridge and another in the community of Vicente Guerrero.

Nieto said up to 70,000 people in the region were left stranded as a result of the rains, with 2,000 sent to shelters. As of Monday, some 500 remained in the shelters, he said.

One community still struggling is Ejido Erendira, a coastal fishing village of 2,500 residents about 50 miles south of Ensenada, 12 miles by paved road from the Transpeninsular Highway. The area is popular with surfers.

Adam Beecham, who operates a 52-bed hostel in the village, Coyote Cal’s, said stores have run out of drinking water, but residents are sharing their supply. Five houses were washed away along the Cañon San Ysidro riverbed, he said in a phone interview. Nieto, the civil protection director, said one lane of the road to the village was open Monday, but it will be closed tomorrow for repairs.

The group had been riding off-road motorcycles when they became stranded and ran out of gasoline. Alfredo Escobedo, the state’s director of civil protection, said that they used a satellite telephone to call out Sunday night to the U.S. Embassy in Mexico City.

Civil protection workers reached the group Monday, and pulled them out by helicopter. Escobedo said they were from California and Colorado.


"Work crews are scrambling to reopen the main highway that connects Tijuana to to Cabo San Lucas at the tip of Baja California Sur. Last week's rains washed out bridges and closed the road.

The highway is the only way for trucks, buses and cars to travel the length of the Baja California Peninsula.

The downed bridges have cut off thousands of people who live in small Baja California communities south of Ensenada.

Many people who were traveling south are stranded in Ensenada.

Johhny Friday runs a whale watching outfit in Laguna San Ignacio. He's stuck in San Diego. Friday's getting reports from bus and truck drivers and a friend who ventured out in a four wheel drive. "He said he passed several hundred cars and semi-trailers and its just stacked up. I find that Baja is probably the best place to ever get stuck. You find communities that'll really help out."

Meanwhile, Baja California's governor has declared an emergency in the area to free up funds for rebuilding."

In 1979 while enroute to Mulege in my pickup camper pulling a boat, myself and about 500 other travelers were stranded between flooded rivers and washed-out bridges between San Quentin and El Rosario.

We were there for 15 days before the waters receded and we were able to navigate the muddy river bottoms to the opposite shores..and regain the highway south. We all pitched in and provided for each other, and also the Mexican Army helicopters would airlift water and supplies to us. I recall a lady had fallen and hurt her hip and was evacuated by helicopter.

It was actually not so bad for most of us tourists...being stranded with so many new friends was a great experience, in a unusual kind of way. We entertained ourselves with songs, playing cards, group cooking, and fireside chats. I kept up a poker game every night in my camper. Lost a few pesos..won a few pesos...and had a ball.

Many stuck in Ensenada for several days now and reports from the police barricade south of town. They are saying conditions badfor up to two weeks. I also talked to many of the truck drivers standing around and they say it may be as early as later today, that the barricades heading south, get dropped.

Report from the observatory up in the mountains, they evacuated before the storm and the road closures.


Pemex gas in limited or little supply south of Ensenada to G. Negro.

The ABC bus out of TJ to El Rosario.
No bus tickets are available for today. So either they are sold out or no buses today.
Tomorrow they have like 10 buses running. So it may be tomorrow until the highway is okay.
The Chapala/ Coco's Corner/ Gonzaga road... reportedly a BIG washout was 5 mins. from leaving Hwy. 1, but a low 2WD Truck got through.

Gonzaga Road Report: The road is passable in 2WD... just very rough between Gonzaga and Huerfanito... as it has been for 5 years.

Northern Baja sustained alot of damage from the
recent Northern Front rainstorms. Many bridges have been washed out, cutting off resources to several towns and ejidos. In particular, Rancho Conception above El Coyote on the observatory road has been totally cut off. Mike and Pamela Wirths are stranded, their access road has been severely damaged and not passable with their vehicles. They have a front loader but the job of digging themselves out requires a bulldozer.

To make matters worse, San Telmo Rd. leading to their entrance has been damaged too and is impassable. They have enough food for a week but are low on diesel and gasoline. They operate on solar and so far so good with sunshine.

Above Rancho Conception is the observatory and condor centers. All people
at these locations are stuck as well.

Mexican officials may not be able to get up there for weeks. Both groups
are coordinating with the Mexican military for emergency supply drops via
helicopter.

Previous: Baja Safari traveled north into Rosarito on the free road. From Los Medanos (the dunes) south of Primo Tapia to Los Gaviotas there were patches of dirt/mud/pothole areas that are rough, but navigable. The road was full of local compact/low rise vehicles navigating the various hazards in both directions and, as usual, the taxis roared by and around slower traffic at warp speed, drenching the slower vehicles with mud splash.

No part of the road was underwater and in Rosarito central, the vados (storm drains) were flowing fiercely, but staying within their banks. Intersections were gloppy, but passable if you wanted to turn off the main boulevard onto the side streets.

The bridge in San Vicente...it has a part totally collapsed (no bridge at all) and the water is still flowing very high on that river... it seems unlikely they will have a pass on that place soon... not until the water comes down quite a bit.

Many people stranded in between the towns of San Vicente and Col. Guerrero... they cannot move forward or backwards... not enough food or water in the small villages...it is really bad down there.

El Rosario and San Quintín are still on a communications blackout... only Movistar cellular services seem to be working in some parts.

Government authorities say they are on site, with the appropriate machinery to conduct repairs, just waiting for waters to come down and be able to work.

There are several places of Highway 1 impassable at the moment, due to the heavy rains:

Normal communications with the San Quintin area are unavailable at the moment... no phone services, no cellular, no internet (only Movistar services are available in some areas). TelNor and Telcel have dispatched technicians via air to attempt repairs.

Even though crew repairs have been sent to repair the road, it seems they are working their way from the North, therefore there have been no time frames mentioned for completion... I do not know, but common sense would suggest that the water flowing in those rivers has to subside before attempting repairs... this could delay the repair crews.

Bridges are out or damaged. El Rosario is currently under a communications blackout with both Cell and Landline. Mario did tell me he spoke to the family in El Rosario yesterday and all are well so far. Thank God! I have visions of the Tromba that came through El Rosario all those years ago and had Mama Espinoza floating on top of that round table clinging on for dear life as the flood water roared around her.

UPDATED! Saturday 5 PM: we were turned back 15 mi south of Ensenada by La Policia. They said the bridge at San Vicente is out, dunno when it will be fixed. Now at hotel in Ensenada; we'll stay overnight and see. If it will take too long, we may go to Los Mochis and take the ferry to La Paz.

Just heard from a friend that you can not travel further south than colonia vicente guerrero. The last time this happened it took weeks to repair. Can no longer even contact family via cell phone. If you want to travel forther south you will not be able to. People living close to the bridges have been told to leave.